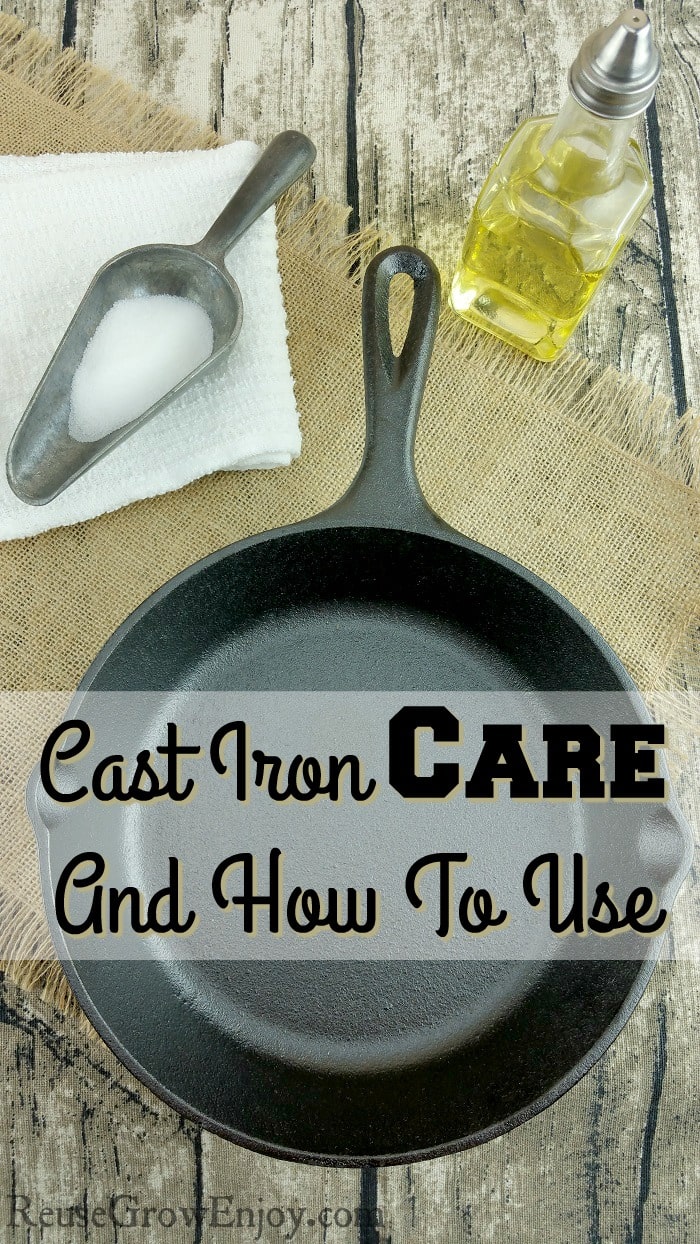 Cast Iron Care And How To Use

Cast Iron cookware, it may be what was used back in grandma’s day, but it is still one of the best cookwares! Cookware fads come and go, but cast iron is one that has been around for many years. Cast-iron skillets are dependable, conduct heat well, and easily go from your stovetop to the oven without any problems, and with the right cast iron care, it will last forever.

I have heard many people say that cast iron skillets have to be handled with kid gloves. Every time I hear this I quietly laugh to myself, do you really think that pioneers traveling in wagon trains handled their pans with kid gloves? Some people have cast iron cookware in their kitchens that are 100 years old or more and they have taken a beaten over the years, let’s see modern cookware do that!

Sad to say many people think greasy fried food when they think of cast iron, but that does not have to be the case. A well seasoned, correctly used cast iron skillet is virtually non-stick. You just have to do the right cast iron care and know how to use them.

Add a layer of salt in the pan (coarse kosher salt works best), use enough to cover the bottom, then add and about a 1/4 to 1/2 inch of oil (any cooking oil you have on hand will work). Then place on medium to high heat. Leave on heat until oil is hot and just starts smoking.

Now being very careful, pour out the salt and oil. Next use paper towels and rub inside of skillet until smooth and even. Always make sure to oil the bottom of the pan as well as the handle.

Preheat oven to 350. Wash, rinse and dry the skillet. Then apply a thin coat of oil to the skillet with a cloth or paper towel, both inside and out. Next, turn the skillet upside down and on the center rack of the oven. Place a cookie sheet on the rack just below the skillet to catch any drips. Bake 1 hour. Turn off the oven but allow to the skillet to remain inside to cool completely.

How many times have you heard it said,“NEVER use soap to clean cast iron or you will ruin the finish?” This has been a hot topic for generations, with strong opinions on both sides. In my book, this is a myth! this does not mean use a ton of soap or that you must use soap all the time, but if needed go for it, it will not ruin your pan. Much more damage is done to your cast iron by letting it soak to remove grim then by using soap. You can dislodge food with a stiff-bristled brush or a cast iron cleaner. If you are having trouble with food sticking to your pan, it’s time to re-season.

Mild dish soap is especially good to remove excess sticky gunk from a pan that is caused by excessive oil remaining on the surface. If you’re wondering how I formed this opinion, I guess you could say the proof is in the pudding or this case the skillet. I have used cast iron for years and the skillets that I have used are no stranger to soap. The catch to the use of soap is that you have to be sure to rinse well and never leave soaking in water. After you have washed the pan well, be sure to get it dry and then re-apply oil so that rust does not start.

All in all, there are basically only two ways you can ruin cast iron pans. First by not rubbing it down with oil each time after it is used it. Second by allowing your pan to get very hot and then dumping cold water on it, or placing it in cold water, both of which can cause cracks.