Light, fluffy and low carb. Yes, you read correctly! What more could you ask for in a cake? Oh, and it’s sugar-free too. How amazing is that? This Angel Food Cake recipe delivers the ultimate in a light, fluffy and sumptuous dessert. 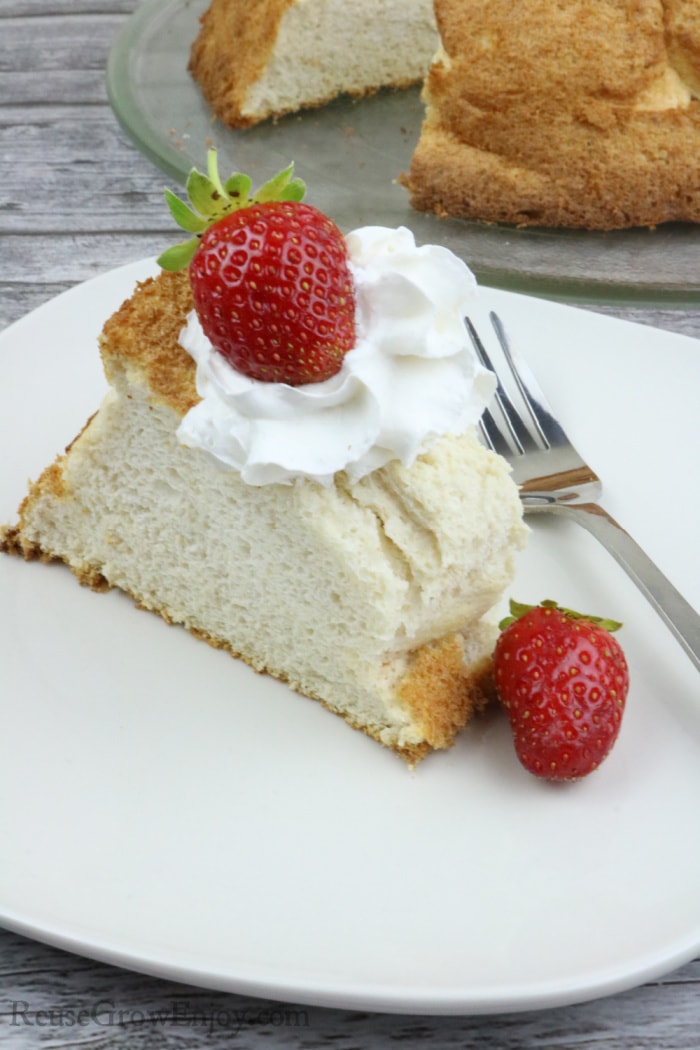 This Low-Carb Sugar-Free Angel Food Cake is a spin of the traditional angel food cake, an oldie but a goodie. Low calorie, low carb but not low in taste. This Angel Food Cake promises to deliver.

It pairs nicely with coffee or tea and a side of fresh fruit. The perfect cake to dress up however you please. Even if you aren’t following a low-carb, no sugar diet we promise you won’t be disappointed with this cake.

If you are looking for other low carb recipes, here are a few to try.

When Did Angel Food Cake Get Its Start?

It is said that in the 1880s in St. Louis, Missouri that is when the Angel food cake was first developed. The first detailed recipe for this cake was published in the Boston Cooking School Cook Book in 1884. By the 1930s, the angel food cake recipe was firmly established.

Making an Angel Food Cake is like starting with a blank slate that you can customize to your liking. Top the cake with any of the following: 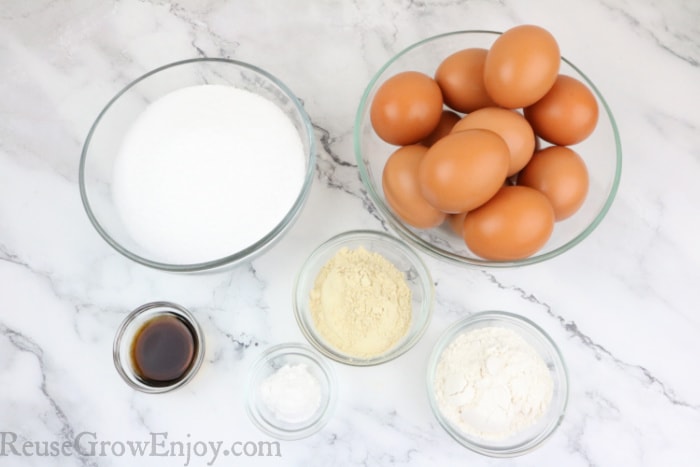 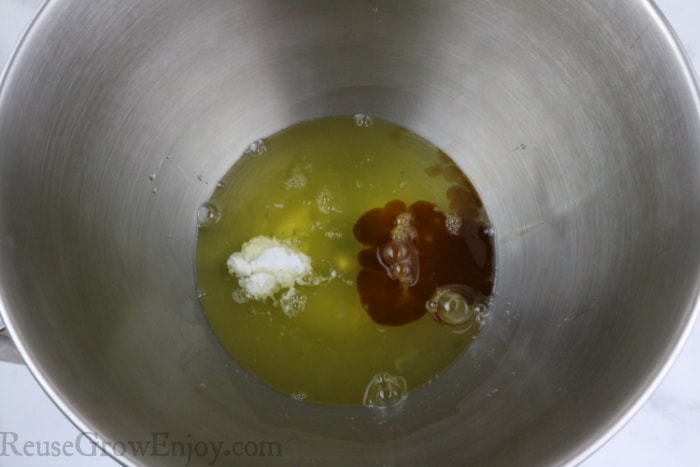 Combine egg whites, cream of tartar, and vanilla in a large bowl or stand mixer.

Mix on medium or low speed until the mixture begins to appear foamy. 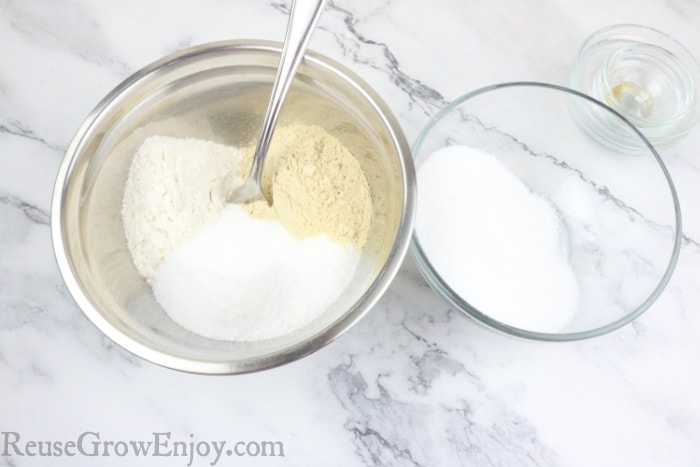 In a separate medium bowl, not a large mixing bowl combine oat fiber, flour, and half the Splenda until fully blended. 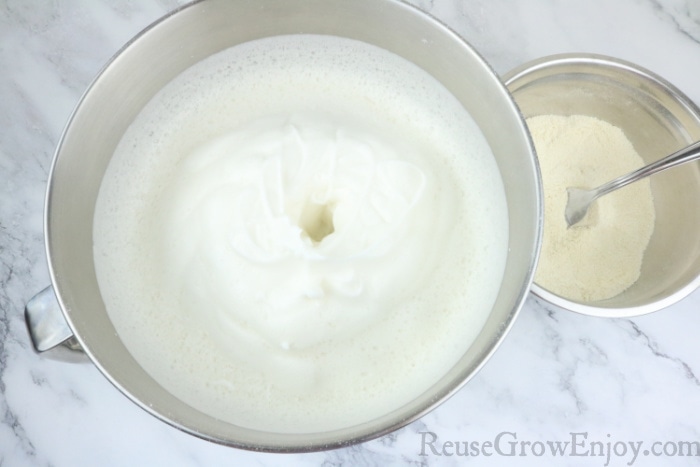 Once the egg whites appear foamy, slowly add the other half of the Splenda. Turn it up to high speed and beat until stiff peaks form. 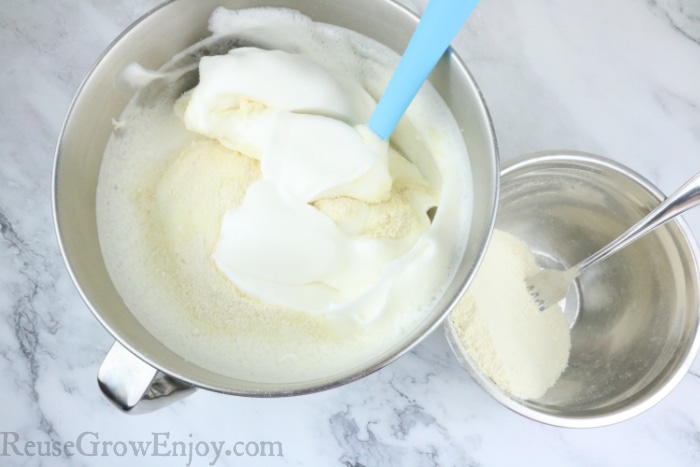 After you have stiff peaks in the egg whites, carefully fold in the flour mixture a little at a time. 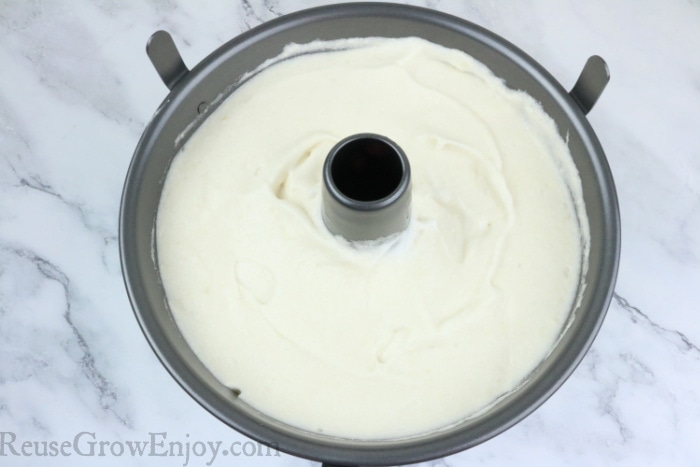 Pour mixture into an ungreased tube pan aka angel food pan. Use a spatula to lightly smooth the mixture out a little to make it a little more even around the pan.

Place in the center of the oven and bake for 30 minutes at 375. The cake will be golden brown when done. 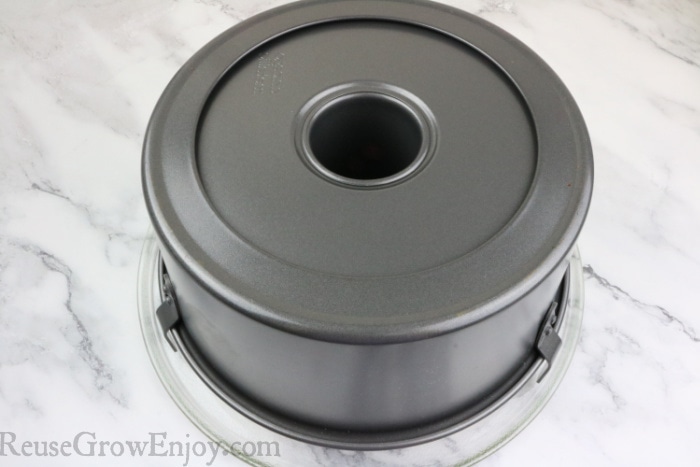 Remove from the oven and allow to cool upside down over a large plate.

Angel Food Cake must be carefully wrapped or covered in an airtight container so as to avoid any exposure to air. Plastic wrap works well for this. Failure to do so will result in a dry cake.

Can I use a different flour to make this Low-Carb Sugar-Free Angel Cake?

While it is recommended to use the flour we have listed in the recipe there are others you can use. Such as you could replace the flour with gluten-free flour if you wanted to make this a gluten-free angel food cake. Just be sure to still also use the oat fiber. I would not however use coconut flour.

Can I use carton egg whites?

I do not recommend it. The egg whites in the cartons have extra additives to them and normally can not be whipped egg whites as well as fresh egg whites.

Do I really need to use 12 large egg whites?

No, eggs are the key to making this cake light and fluffy but as long as you use about 1 1/2 cups of egg whites it will be fine. So if you only have small eggs, you can use them.

How far in advance can I make the cake?

This cake can be made a few days in advance. If you prefer to make it a few days before serving it just be sure to wrap it very well. It can also be frozen.

Why is my cake not soft?

If you don’t have a soft fluffy angel food cake you may have beat the egg whites too much or too little.If you have beaten them too much after the stiff peaks, the air will be beaten out of the mix. You have under beat only to have soft peaks form, then there is not enough air in the mix.

Can I use any tube pan to bake the Angel Food Cake?

It is best to use an Angel Food Cake pan to bake this cake but other pans such as a bundt pan can be used. Just make sure it is not a detailed pan as it will be really hard to remove. It can even be made in loaf pans.

How long should I let my cake cool?

Let the cake cool until it is cool to the touch.

Do I have to turn the cake upside down to cool?

Yes, it is best to turn the cake upside down to cool to get the correct texture.

Should I grease the Angel Food Cake pan?

No, it is not recommended to grease the pan. However, you can line the bottom of the pan with parchment paper and grease the paper.

What does low carb mean?

Those who follow a low carbohydrate diet limit foods high in carbohydrates and replace them with foods containing a higher percentage of protein and fiber.

How is this cake sweetened if it is sugar-free?

This cake contains Splenda which is an artificial sweetener and sugar substitute. Splenda is made from sucralose which is a zero-calorie sweetener that is said to be 600 times sweeter than sugar.

How is this cake usually served?

While there are lots of different toppings you can add to an angel food cake, the most common way to serve it is with berries and whipped cream.

Is this Low Carb Sugar-Free Angel Cake low in calories?

If you are not worried about carbs, you may want to check out this Easiest Instant Pot Cake: Angel Food Cake Recipe. 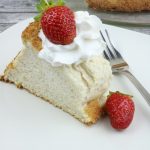