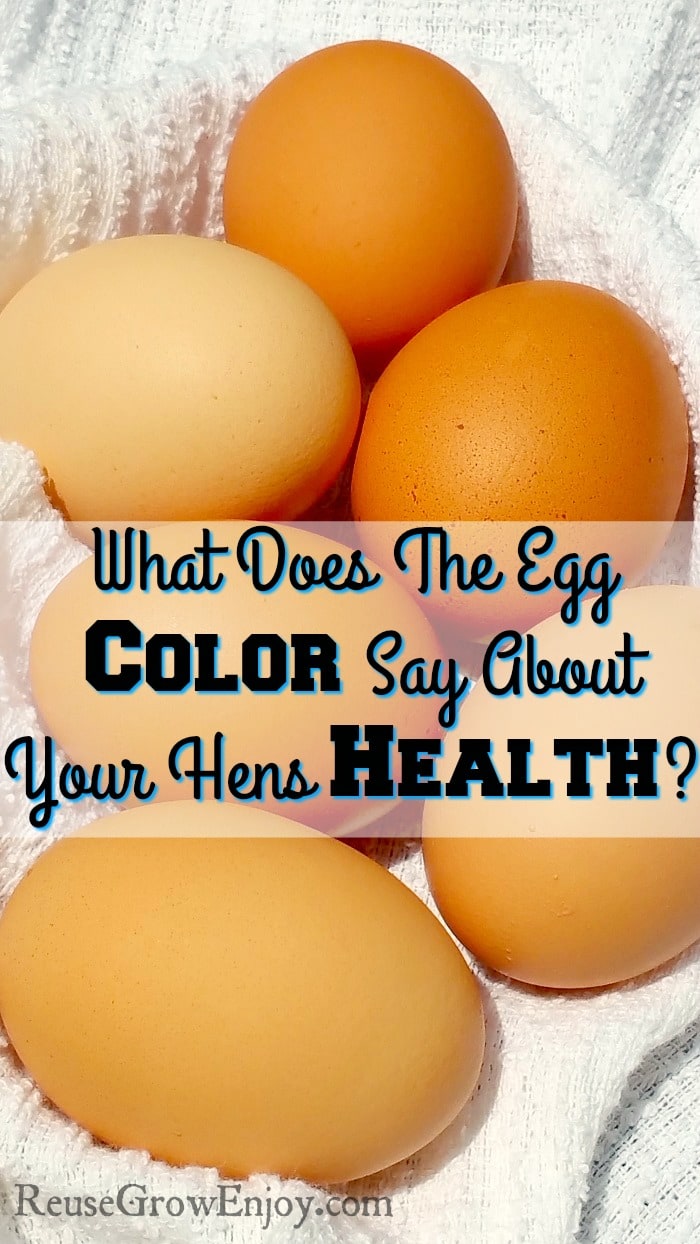 What Does The Egg Color Say About Your Hens Health

Eggs come in a variety of colors, the most common being white and brown but you can have cream, chocolate brown, speckled, blue, or even green. Have you ever wondered why eggs come in so many different colors or if the color of the egg shell impacts its nutritional value or flavor? For the most part, a chicken egg is a chicken egg when it comes to color. Egg color is primarily determined by the chickens genetic makeup, which is why Leghorns lay white eggs, Buff Orpingtons lay brown eggs, Ameraucanas lay blue eggs, and Olive Eggers lay a lovely olive green egg. Olive Eggers result from crossing a blue egg layer such as an Ameraucana, with a dark brown egg layer such as a Maran.

Did you know that all eggs start out as white and receive their color as they travel on their way through the chicken’s oviduct? The shell is made almost entirely of calcium carbonate. Calcium carbonate is a white mineral. Ameraucana chickens deposit oocyanin pigment on newly forming egg shells, this pigment is added early on and permeates the shell of the egg causing both the inside and the outside of the shell to be the same blue color. The pigment found in brown eggs is protoporphyrin and is added late in the formation of the egg, so it colors only the outside surface of the shell.

With all that being said, did you know there is more to the color of an than meets the eye? Once you have come to know what color, size and texture egg your chickens generally lay then the color of your chicken’s egg shells can alert you to potential problems in your flock. Stress, viral diseases, deficiencies, and even certain medications can affect the color, size, and texture of your hen’s eggs. So let’s take a look at what the egg color can say about your hen’s health.

One of the biggest problem in ANY change of eggshell appearance is stress. Stress can come from a number of things, nutritional stress, physical stress, or environmental stress. These can all affect the color of your hen’s eggs.

Nutritional Stress:
Zinc, copper, calcium, and manganese are said to be important factors in shell pigment. Shell color can be improved by adding these supplements to your chicken’s diet. Unless you know for sure what it is that your chickens are lacking, I would add one at a time and give it about a week to see if the egg color improves. I normally start with the calcium as it is almost always the one that they are lacking. When your hens do not have all of the nutritional values that their body needs to make eggs, it will start to pull from other body sources such as bones for the calcium. This can make for a whole world of issues for your hen. So it is best to keep a close eye on your eggs each day so you notice when things start changing and treat for deficiencies right away.

Physical Stress:
Change in routine, bullying within the flock, viral infections, medications such as the Coccidiostat drug, Nicarbazin, often found in commercial feed, and even the age of the chicken its self all can be causes for a change in egg color, size or even not laying at all.

Environmental Stress:
Hot weather, external or internal parasites, predators. It is critical that chickens have plenty of shade and cool, clean water to drink in the summertime. They are little animals but you would be amazed at how much water they can drink. Having a good clean source of water not only helps keep up egg production, it helps them to cool their bodies.

Speckled Eggs:
Speckles or spots can be caused by stress during the shells calcification period. They can also be caused by young hens that have not been laying long and may be having a hard time. Older hens can also have a hard time and leave behind small specks of blood on the shell. This is often caused from lack of fresh water or poor diet. If the spots can be washed off with water then it is blood and you should try changing diet and giving more clean water to see if it helps. If they do not wash off, more than likely it is just specks of pigment that came out uneven during the shells calcification period and you have nothing to worry about.

Powdery Egg Color Layer Covering Egg Shell:
A powdery coating on an egg shell is caused by calcium and may be due to stress during the calcification process, this is most likely the case if the coating happens suddenly. However, it can also be caused by defective shell glands or by excessive calcium in the hens diet.

Bloody Shell:
From time to time, you may notice a few spots globs or smears of blood on the egg shell or sometimes, even more. This is more common in young hens as they begin to lay but can also be a problem for overweight birds.
This most common cause for finding blood on egg shells comes from the rupture of small blood vessels from straining.

Other causes may be vent pecking or cannibalism.

An infestation of mites or lice.

The sudden change of light such as if you suddenly start supplementing light during winter months.

Soft Shell or No Egg Shell:
There can be a few causes for this. It could mean that your hen has an immature shell gland, disease or infectious. But more often than not it means they are lacking nutrition. It normally ends up being calcium that they are lacking but could also vitamin D3, manganese or phosphorus.

Pale Egg Color or Mottled Egg Shell:
These shells can be super thin and almost clear when held up to light. Causes for this type of shell can come from poor venting in the coop leading to high humidity when the eggs are laid and can not dry out fast. It can also be caused by over crowding of the hen house. However, it can also be caused by diseases and mycotoxins or just from a deficiency in the hens diet such as manganese deficiency or calcium deficiency.

Get to know your flock, in that way, you will get to know what is normal for your birds and thus be able to head off problems before they get out of control.

If you liked this post, here are a few others you may want to check out.